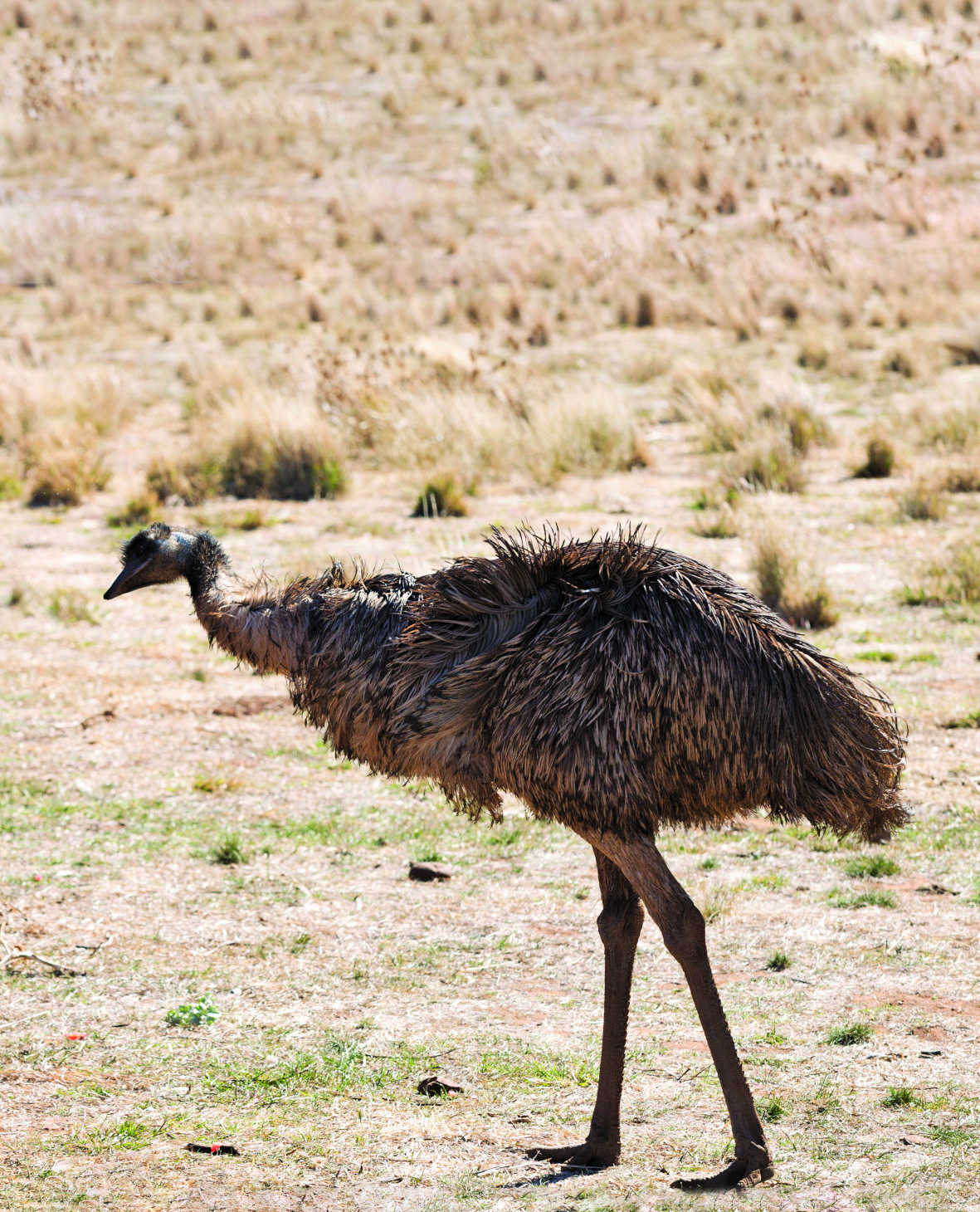 Imogen Thomas’ stirring, if sentimental, film centres on a young girl who’s lost her mother, the bird she befriends to cope with this loss, and the family and community that rally around her. While Emu Runner quite overtly builds on its myriad cinematic antecedents, it’s also notable for its focus on an Aboriginal story – one crafted with the local community’s involvement, writes Aimee Knight.

Nine-year-old Gem (Brewarrina local Rhae-Kye Waites) lives in a regional town near the banks of the Barwon River. After spending a day fishing with her mum, Darlene (Maurial Spearim), and sister, Valerie (Letisha Boney), she witnesses Darlene’s untimely death. The child and her family are understandably distraught. Soon enough, the adults in Gem’s life feel the pressure to start moving on, but the pre-teen struggles to articulate her enduring grief and sorrow. Yearning for comfort and connection, Gem befriends a wild emu – her mother’s totem ­animal – until the unintended consequences of doing so cause far more harm than healing.[2]Perhaps it’s worth noting here that, in 1932, white soldiers in Western Australia waged a literal war on their local emus. After just a few foolish weeks, the servicemen lost spectacularly, making emus a fitting symbol for Indigenous resilience in the face of colonial violence; see Urvija Banerji, ‘In 1932, Australia Declared War on Emus – and Lost’, Atlas Obscura, 21 March 2016, <https://www.atlasobscura.com/articles/in-1932-australia-declared-war-on-emus-and-lost>, accessed 26 February 2019. In this way, Emu Runner ruminates on the role of matriarchs and maternal stand-ins for little women missing their biological mothers. This is particularly pertinent in the context of Brewarrina’s Ngemba people. Like many Australian Indigenous communities, they are matriarchal[3]As noted by Thomas; see Gillie Collins, ‘Imogen Thomas on Emu Runner: “The Film Willed Its Way into Existence.”’, Seventh Row, 2 October 2018, <https://seventh-row.com/2018/10/02/imogen-thomas-emu-runner/>, accessed 26 February 2019. and therefore, in many ways, at odds with the patriarchal structure of European colonisation.

The figure of the motherless daughter is common in coming-of-age stories, as seen in on-screen precedents such as Pretty in Pink (Howard Deutch, 1986), Clueless (Amy Heckerling, 1995), Sydney White (Joe Nussbaum, 2007) and, most recently, To All the Boys I’ve Loved Before (Susan Johnson, 2018) and Eighth Grade (Bo Burnham, 2018). These films explore the minefield of father–daughter relationships exacerbated by hormones, heartbreak and the hole left by the loss of a mum. It’s a relatable, important topic, one that Emu Runner embraces and builds on by virtue of some key differences. For instance, Gem is a few years younger than her counterparts in the aforementioned films. She’s also battling a separate set of emotional, psychological and cultural – all the other films are American – hurdles.

Seeking to fill the void left by Darlene is Gem’s dad, Jay Jay (played by writer, director and performer Wayne Blair, who appears alongside a largely untrained cast and brings affection, gravitas and tenderness to the role). Like a male emu responsible for raising its hatchlings,[4]See ‘Park Notes: Emu’, fact sheet, Parks Victoria, <https://parkweb.vic.gov.au/__data/assets/pdf_file/0003/322194/emu4.pdf>, accessed 13 February 2019. the grief-stricken widower takes it upon himself to keep his family together. Despite his wider community’s distrust regarding his abilities, he’s fiercely protective of his brood. When Gem steals food for the emu, Jay Jay does his best to discipline her without driving her further into social withdrawal. He also sticks by his son, Ecka (Rodney McHughes), when the young man’s alcohol and drug use – in part, a response to losing his mum – makes him a target of racial prejudice in their small town.

Touching on themes such as stereotyping, forced child removal, substance reliance and premature death in First Nations communities, Emu Runner can be considered a contemporary addition to the cinematic canon of social realism. Films in this genre examine the sociopolitical conditions experienced by working-class people in order to critique the power structures that create systemic oppression. While it has roots in Italian neorealism – see, for example, Vittorio De Sica’s Bicycle Thieves (1948) as well as Roberto Rossellini’s Stromboli (1950) and Europe ’51 (1952) – social realism is most commonly associated with the cinema of Britain, where the genre boomed after World War II.[5]See Richard Armstrong, ‘Social Realism’, BFI Screenonline, <http://www.screenonline.org.uk/film/id/1037898/index.html>, accessed 13 February 2019.

British social realism, like Italian neorealism before it, strives for verisimilitude – or the closest approximation of reality that cinema can logistically muster. It uses techniques that evoke the documentary form, such as filming on location and casting actors with little to no formal training, to tell authentic stories embedded within the communities and cultures they portray.[6]Samantha Lay, British Social Realism: From Documentary to Brit-grit, Wallflower Press, London & New York, 2002, pp. 8–10. This is the case with Emu Runner, which makes good use of Brewarrina’s natural and human-made infrastructure for sets and scenery. Moreover, its cast largely consists of the town’s residents, including Waites, her cousin Boney, and her grandmother and grandfather, alongside the other schoolchildren and townspeople featured.

Thomas wrote Emu Runner in consultation with local Ngemba woman Frayne Barker, director of the Gainmara Birrilee Preschool. The two women met while Thomas was involved with an arts initiative at Ourgunya Women’s Safe House in 2003. During that time, Thomas also met many women and children from the Brewarrina area. Their stories helped her develop an informed understanding of the issues affecting their community.[7]‘Inspiration’, Emu Runner official website, <https://www.emurunnerfilm.com/inspiration/>, accessed 13 February 2019. This led to Thomas and Barker’s first collaboration, the short film Mixed Bag (2008), in which a white woman visiting a regional town confronts her racial biases. Ten years later, after a persuasive visit from Waites’ grandmother, Thomas committed to making Emu Runner.[8]Kathleen Ferguson & Dugald Saunders, ‘Emu Runner Film Brings Stars and Opportunities to Remote NSW Community of Brewarrina’, ABC News, 26 September 2017, <https://www.abc.net.au/news/2017-09-26/emu-runner-film-brings-opportunities-to-brewarrina-locals/8989530>, accessed 26 February 2019. Barker came on board as Indigenous script consultant – and staunch supporter – from the very start. She describes the experience as ‘empowering’ for everyone on set, and notes that the film had broadened people’s horizons.[9]Frayne Barker, quoted in ibid.

Also key to the project were established actors Blair and Logie Award winner Rob Carlton, whose prior screen experience bolstered the performances of their non-­professional counterparts. While Blair’s convincing turn as the primary carer of Gem and her siblings sees him offering a proverbial fatherly blanket to his on-screen family, Carlton’s concerned cop Stan – alongside city-slickin’ social worker Heidi (Georgia Blizzard) – is a pitch-perfect portrayal of how well-meaning authority figures can enact a condes­cending and ignorant paternalism. Clear outsiders en­croaching on the Ngemba mob, and even the white working-class Brewarrina residents, Stan and Heidi move through life informed by innately different frameworks of living, being and grieving. Their trust in ‘the system’ drives Heidi to take Gem from her family during the film’s tense emotional climax. This exemplifies the very real, enduring practice of forced child removal that has ruptured Indigenous communities across Australia for decades.

Rightfully, though, Gem is eventually returned to her family; here, Emu Runner reinforces the notion that kinship care is best, wherever possible. This assertion is notable in the context of Australian cinema, and our wider media landscape, which frequently views Aboriginal families with a patronising, imposing white lens that is similar to Heidi’s.[10]See Jack Latimore, ‘The Passive Racism of Australian Media Is Borne of Arrogance, Ignorance, Fear and Fragility’, The Guardian, 31 January 2019, <https://www.theguardian.com/commentisfree/2019/jan/31/the-passive-racism-of-australian-media-is-borne-of-arrogance-ignorance-fear-and-fragility>, accessed 26 February 2019.

Thomas cites titles like The Fallen Idol (Carol Reed, 1948), Forbidden Games (René Clément, 1952), Paper Moon (Peter Bogdanovich, 1973) and The Kid with a Bike (Jean-Pierre & Luc Dardenne, 2011) as thematic and visual influences on her film.[11]‘Visual Style’, Emu Runner official website, <https://www.emurunnerfilm.com/visual-style/>, accessed 13 February 2019. Much like Emu Runner, each of these stories places a child in a situation they are not emotionally equipped to process: witnessing a murder, adjusting to life as a wartime orphan, running scams during the Great Depression and being intentionally abandoned by a parent, respectively. While the first three are shot in black-and-white, Emu Runner is in colour, capturing the naturally soft, low-contrast pastel palette of places (and people) that seem to have been left behind by society at large.

Noticeably, shades of pink tinge everything Gem touches, from her clothes and bedsheets to the bathroom walls, the peeling paint on her family’s fibro house and the dusty sunsets that wash her skies in rose-gold light. Lots of long, warm, wistful shots linger on the scenery: traditional lands of the Ngemba, Murrawarri, Ualari, Weilwan and Baranbinja ­peoples.[12]‘Inspiration’, Emu Runner official website, op. cit. The cinematography meditates on the trees, plains, seasons and creatures – both native and introduced – that have reshaped the landscape over millennia. A close-up of the emu’s face reveals his smooth skin, stumpy feathers, little smirk; he looks surprisingly human. And, while the prevalence of pink is unlikely to be a direct homage to Deutch’s Pretty in Pink, it at least illustrates Gem’s present girlhood innocence; after all, we in the West associate the colour with young women. She’s still at an age in which she hasn’t yet had to choose between liking ‘girly’ things (her floral wardrobe and bed linen, for instance) and ‘tomboy’ things (like sport – Gem is a natural runner). It’s also a constant visual reminder of the major feminine presence that has been ripped from her world.

Told squarely from Gem’s point of view, Emu Runner is thus more likely to resonate with children than with adults. Jaded and curmudgeonly grown-ups may not have the ­patience for its awkward line readings and overtly earnest tone, whereas younger audiences (and those young at heart) may look past the modest performances and meagre production value to reap emotional reward from the poignant story.

The films Emu Runner most closely resembles – ‘parrots’, even – are those depicting child–animal bonds. Back in the day, they were found in droves throughout Blockbuster’s ‘Family’ section – think: Old Yeller (Robert Stevenson, 1957), The Black Stallion (Carroll Ballard, 1979), Free Willy (Simon Wincer, 1993) et al. Within this subgenre of kids flicks, there’s a flock of ‘child and bird’ titles, such as Kes (Ken Loach, 1969), Storm Boy (Henri Safran, 1976) and Fly Away Home (Ballard, 1996).[13]Fly Away Home charts teenage Amy’s (Anna Paquin) connection to a gaggle of Canada geese and, moreover, to her estranged father, Tom (Jeff Daniels), in the wake of her mother’s sudden death – a plotline that uncannily resembles that of Emu Runner. Many of these films were based on already popular books, suggesting that the moral values and messages contained in stories about kids and animals bear repeating. These ‘empathy generator’ coming-of-age narratives teach us about unconditional love and the fragility of life. They create secure yet ephemeral spaces to vicariously feel grief, maybe for the first time. And, for kid viewers experiencing separation, loss or death in their real lives, these melancholy movies can validate sorrow, anxiety, anger and confusion. They can provide guidance – however glossy and Hollywood-ified – as to how life can begin again.

Given that a heap of forerunner films have been mentioned, it’s worth reiterating that Emu Runner does extend on these existing coming-of-age, social-realist and human–animal filmographies. The vast majority of the texts referenced above feature white (and, often, male) protagonists. In contrast, Emu Runner increases Aboriginal representation in Australian cinema – particularly in the sphere of kids’ films – in the form of its principal and supporting cast, an achievement only strengthened by the fact that its lead is female. Beyond this, as a consequence of the production team’s consultation with the Aboriginal community in Brewarrina, the film pays respect to the Indigenous customs and lore that ultimately become integral to the unfolding story.

While Emu Runner is joyous, optimistic and sweet, it doesn’t shy away from depicting fraught sociopolitical issues that are often ignored or distorted in the broader media landscape.

Aimee Knight is a writer and critic from Kaurna land. She is the small screens editor at The Big Issue and the pop culture columnist at The Lifted Brow. Her work appears in Little White Lies, Overland, Meanjin and more.