This year’s festival saw an emphasis on ‘serious’ cinema, and Guy Rundle wonders where all the risk-takers have gone.

It was eleven in the morning on the last full day of the 63rd Cannes Film Festival, and down at the old flea-bitten Star cinema, the old picture palace tucked behind La Croisette, a hundred or so people were staggering into the late-morning light. As the sun sparkled on the water and the outdoor cafe tables began to fill with the late breakfast crowd, we all looked each other up and down with a sense of mutual respect and solidarity. Some lit cigarettes.

At the beginning of the morning there had been dozens more of us, but they had departed one by one. Now just the hardcore remained – those who had sat through the entirety of Jean-Luc Godard’s Film Socialisme, a three-part cinema essay on history, Greece, Palestine, the financial crisis, the collapse of the USSR and a great deal more. Much of the film was shot on a Mediterranean pleasure cruise, the cabins occupied by a range of figures from singer/poet Patti Smith to philosopher Alain Badiou.

The film had premiered out of competition at the beginning of the festival, with rumours that the great man himself would appear for one of his legendary press conferences. Alas, Godard was not able to attend. And with rumours swirling that his absence was due to ongoing tax disputes with the French authorities, the whole affair only added to the film’s mysterious allure. Beautifully composed yet intellectually challenging, the English ‘subtitles’ were really a set of allusive words in counterpoint with the rapid stream of ideas coming across the soundtrack. Having established the conceit of the ocean liner, Godard then subverted it by taking us to a family-run garage in the countryside, with an account of a confrontation between a film crew and the family.

The reversal was clear: the cruise ship was a spangly, floating no-place of gambling, lounge acts and joyless buffets, moving through sites with more history than you’d care to name; meanwhile, the family were marooned amid a ceaseless tide of cars on the autoroute, dependent on them for their livelihood. It was in this section, featuring the director’s love of aleatoric non sequiturs in extremis, that audience members started to break: first there was fidgeting, later they got up and left. One could hardly blame them, since it was impossible to know whether Godard’s trademark technique of repeatedly frustrating the audience’s desire for easy resolution or straight representation was now in service to an argument or whether he was simply playing silly buggers.

Yet once Film Socialisme came through its third, most Vertov-esque section, there was a sort of exhilaration – a sense of total cinema, however partial the film’s particular success. Going in, conscious of the films one wasn’t seeing, there had been vague guilty thoughts: was this just star-fucking, seeing the relics of a one-time cinema saint? But no, it didn’t seem that way. If the old master’s work seemed so distinctive, it was less to do with his singularity and more that the festival as a whole either wouldn’t or couldn’t find films of a similar intent, those determined to use their content to challenge their own form, to refuse the fall into genre. One wonders what many on the jury – from Tim Burton through Kate Winslet(?) – would have made of Film Socialisme at all.

Perhaps this was one reason why this year’s festival concluded with un certain air of disappointment – and a lack of revelation.

Though early Palme d’Or talk had focused on English-speaking entries Mike Leigh’s Another Year and Ken Loach’s political thriller Route Irish (no one for a second supposed that Doug Liman’s Fair Game had a chance), the prize ultimately went to a Thai film, Apichatpong Weerasethakul’s Uncle Boonmee Who Can Recall His Past Lives. The plot summary makes it sound like something that Marg Downey’s SBS presenter character from Fast Forward would have introduced: a man suffering from kidney failure returns to his old village, where he meets the spirit of his lost family in a cave (‘I am gripping the side of my chair with excitement’), but it soon became clear that it was as much a reflection on cinema itself as it was the filming of a folk tale. Nevertheless, one couldn’t help thinking that the film’s aesthetic, its slow pace and lingering silences were an exercise in a well-worn modernist style. Uncle Boonmee quite possibly stands as a breakthrough in Thai cinema, but there was a feeling that its inclusion and elevation by the jury was a testament to an idea of ‘serious’ cinema rather than one of cutting-edge practice.

Indeed, that feeling pervaded many of the films in competition. To tell the truth, I walked out on more films than Terry Gilliam. Abbas Kiarostami’s Copie Conforme (Certified Copy), for example, was admirable for the Iranian director’s determination to buck current expectations and film a chamber piece in Tuscany: the story of a looked-for rare book and of a man and a woman who become an instant and largely imaginary couple over the course of a day. Subtle and playful, Copie Conforme nevertheless veered close to a mid-market feel-good flick. Its star, Juliette Binoche, once remarked that she had quit making films in her home country because all French films were the same: ‘three people have an affair and then they go to a restaurant’. She seems to have returned to her roots, with a work that might be summarised – à la the standard pitch – as ‘Brief Encounter meets Under the Tuscan Sun!’

Another work that provoked admiration and tedium in equal measure was Jury Prize-winner Un Homme Qui Crie (A Screaming Man). Directed by Chadian director Mahamat-Saleh Haroun, the film focuses on a swimming pool attendant whose job is taken from him when a Chinese firm takes over his hotel. There’s no doubt that Youssouf Djaoro gives a searing, brooding performance in the lead role. He channelled the deep humiliation of being ‘the little man’ and evoked a sense that the hapless pool attendant’s fate is bound up with the lost promise of Africa, passing from imperialism to globalisation without an intervening period of effective national liberty. Lee Chang-dong’s Poetry (South Korea), Sergei Loznitsa’s Schastye Moe (My Joy) (Russia), Alejandro González Iñárritu’s Biutiful (Mexico) and others were all in that manner. There were films that had politics at their centre, such as Rachid Bouchareb’s Hors La Loi (Outside of the Law), which focused on the Algerian war of independence – its alleged anti-French bias attracted a protest march by army veterans and the National Front through the centre of Cannes. But such films also pursued a direct psychological realism. Where, one wondered, were films such as Fahrenheit 9/11 (Michael Moore, 2004), Underground (Emir Kusturica, 1995) or Dancer in the Dark (Lars von Trier, 2000), to name only a few winners of the last fifteen years, where genre and modes of storytelling had been transformed in the service of a widened mode of expression? Even Un Certain Regard was relatively bereft of such content, featuring Hideo Nakata’s formulaic Chatroom (‘It’s The Ring meets MySpace!’) and half a dozen Romanian films that, according to those who saw them, veered closer to a grim post-socialist realism than the first wave of new Romanian cinema several years ago.

One Romanian work that did take us in a different direction was Andre Ujica’s three-hour The Autobiography of Nicolae Ceausescu, which screened out of competition. Using the voluminous footage that the Ceausescus had had shot of themselves during their quarter century in power, Ujica managed to build up a portrait of their growing isolation and departure from sanity. He also showed something that has been lost in the recent rush of Romanian realist cinema: the essential strangeness of the country during that period, and afterwards – right up to the present.

True, the realist wave of Romanian directors offered a useful corrective to the image that the country had taken on – that of a repository for everything batty about end-stage communism (a role currently taken by North Korea). But their focus on the country’s unremarkable features – torpor and rations – also denied the strange unreality of the country in that era, as a sort of Stalinist Disneyland with Dallas screening on TV back-to-back with propaganda screeds. Ujica’s film recovered some of that.

Finally, Australia’s presence this year was not unimpressive, but curiously also close to invisible. Western Australian producer Sue Taylor’s The Tree closed the festival, but any recognition of that was muted in the Australian press. In the French press too, but that’s par for the course, as the Australian–French co-production had a French director (Julie Bertuccelli) and star (Charlotte Gainsbourg). Yet the story, of a young girl whose dead father speaks to her through the medium of a tree, was taken from an Australian novel, filmed in Australia and had an unmistakeably Australian setting, something for which Taylor had fought determinedly. This was more than a question of mere localisation, since a European setting would have given an entirely different meaning to the film’s central preoccupation of the dead speaking to the living through the medium of nature. Not least significant was the ‘casting’ of the tree itself, an eerie Moreton Bay fig that took the production team two years to find.

In another curious triumph, the Caméra d’Or was won by Australian director Michael Rowe for Año Bisiesto (Leap Year). Yet Rowe, who also co-wrote the script, has lived in Mexico for the past sixteen years and only began to work in film there. While Rowe has won several screenwriting prizes, Año Bisiesto is the first major movie he has made: a steamy piece about a woman challenging her own inhibitions through a course of promiscuous sex. ‘I wanted to make the most Mexican movie I could,’ Rowe told the press. It is about as non-Australian a movie you could get, at least in current incarnations. I enjoyed the sex, but Rowe’s comment about making a self-consciously Mexican film probably said more than he wished to about Año Bisiesto’s slightly studied air.

Our one unmistakeable, claimable winner was Ariel Kleiman’s Deeper Than Yesterday. The twenty-minute short, which screened during Critics’ Week, won the Kodak Discovery Award for Best Short Film. Set in a longhaul Russian submarine and filmed in Russian, as far as Aussie film goes it makes Das Boot look like Bush Christmas.

From claustrophobia under the sea to Godard’s anti-pleasure cruise, it was a funny old year for anyone who wants a bit more from cinema than an authorised seriousness up against total escapism. One couldn’t avoid the feeling that the form was more than a little becalmed.

Guy Rundle is a Melbourne writer. He is currently based in the UK and files regular reports for Crikey. 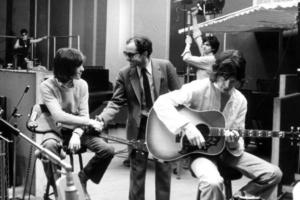